“No road is long with good company.”-Turkish Proverb 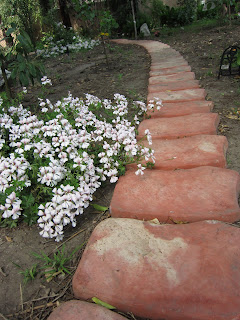 May 2011  Whether you were elated or annoyed by the constant coverage of the UK’s royal wedding, there is one thing that cannot be denied: weddings peak the human interest. Most seemed to be tired of the incessant talk of the event, but the truth of the matter is that two billion people—one third of the world’s population—tuned in to watch the wedding. And on Youtube, there were more than 72 million views, a number larger than the population of Britain.
Is it the story of Prince Charming that captures us? Is it the idea that the childhood dream could be true? Maybe, but even in this Cinderella story, Prince Charming did not appear over night to save the fair maiden.  The two were in a relationship for ten years before a wedding took place and they were friends even before they began dating.  After years of relationship studies and research, friendship has been found to be one of the most important facets of making a marriage work. In fact, friendship and companionship in general provide for a healthier, happier and longer life. Perhaps the union we seek in Prince Charming can be found all around us.
The connection with another person proves to be powerful. Maybe that’s what is so exciting about a marriage—whether it’s historical, or on a reality TV show. The bond and connection with another being is an undeniable human necessity and desire.
When it comes to relationships—whether with a significant other, a friend, or family, there are many elements that play into achieving a quality relationship that makes you happy and healthy.  Good friendships have been shown to boost your immune system. Studies on both animals and humans have revealed the importance of companionship. For instance, hamsters that had skin wounds healed faster when they were placed in a cage with other hamsters. Similarly, Harvard researchers found that breast cancer patients lacking a support system were four times more likely to succumb to their cancer than those with a bigger support system.   A recent report linked increased friendships to a lowered risk of dementia. In another study in the Journal of Experimental Social Psychology, participants standing at the bottom of a steep hill with a friend described the climb as easier than those who were alone. Of course, the key to such findings is healthy, quality companionship.
Despite all of the recent social networks and the hundreds of people listed as “friends” on our Facebook profiles, studies have found that Americans have one third less friends today than they did 20 years ago.  With all the benefits of friendship and companionship, people seem to dismiss the advantages of face-to-face socialization. Having a support system doesn’t just involve “tweets,” “wall posts,” or “texts.” While these are all helpful forms in staying connected and communicating, there needs to be more real contact to gain the true benefits of friendship.
With all that said, we can improve our well-being by taking time to strengthen our marriage and relationships. There are simple things that can be done to make this happen. Make an effort to have a date night or a weekly lunch date with your partner. Try to see your friends more often and plan more outings. Use the numerous forms of technology to stay in touch and to arrange real life activities. Find workout partners, hiking buddies, movie buffs, concert goers, beach lovers, foodies, etc. Some find it difficult to make friends as they get older.  There are many avenues to connecting or reconnecting with people. Websites like meetup.com allow for people to join groups that actively meet for common interests.  Take advantage of opportunities to meet others like attending events, networking meetings, or going to coffee shops and bookstores to read your favorite novel.  Making time for others means making time for you. Investing in quality relationships will lead to a quality life. With good company by your side, life can be so much more satisfying…and maybe quite royal. — 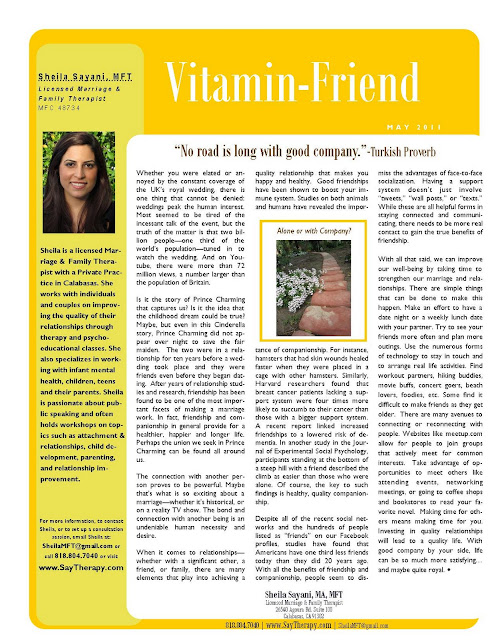 Posted by Sheila Sayani, Marriage and Family Therapist at 3:37 PM No comments:

Sheila Sayani, Marriage and Family Therapist
Sheila is a licensed Marriage and Family Therapist (MFC 48734) in private practice in Calabasas and Encino. She works with individuals and couples on improving the quality of their relationships through therapy and psycho-educational classes. She also specializes in working with infant mental health, children, teens and their parents. Sheila is passionate about public speaking and often holds workshops on topics such as attachment & relationships, child development, parenting, and relationship improvement. For more information, to contact Sheila, or to set up a consultation session, email Sheila at: SheilaMFT@gmail.com or call 818.804.7040 or visit www.SayTherapy.com